In the last Olympic Games in Rio de Janeiro, the usual suspects made it to the men’s 4x100m relay final. As you might remember, Jamaica, led by Usain Bolt, won the gold medal, admittedly not a big surprise. A tough question, however, is who won the silver medal.  If you are not much into athletics, your educated guess might be either US or Canada, indeed former winners, but actually the second place was to… Japan!

But… who are these guys? (Picture: The Japan Times)

The fact the Japan was second only after Jamaica is surprising mainly because none of the four athletes that make up the Japanese team are specially fast (in relative terms of course) at running the 100m race. The table below shows, for the five best teams in Rio, the names of the team members together with their best personal marks in the 100m race. As you can observe, not a single Japanese is below 10 seconds, in contrast to all other teams.

Source: own elaboration based on data from Wikipedia.

To get a better perspective of how outstanding Japan’s performance was, we can represent some of the figures in the table above pictorially. 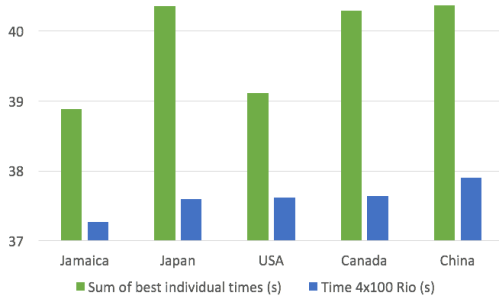 Th graph represents, for each team, the sum of the best individual marks of the team members (in green) together with the total time at the 4x100m relay in Rio (in blue). Common sense suggests that, roughly speaking, the teams with the best performers at the 100m race,  should also perform better at the 4x100m relay. And as you can observe, that is actually the case for all teams in the graph, except for Japan. In fact, Japan should have been fourth or fifth. Not only Japan was second, but they were faster than the US by more than a second, a lifetime when it comes to the 4x100m relay.

How did Japan achieve such an outstanding performance? Well, the truth is that the Japanese were extremely good at passing on the baton. They admitted having trained and trained for months to achieve this superior performance at handing over the baton. On average, they reduced each transition by some 30 or 35 hundredths with respect to the other teams. It doesn’t seem much, but, overall, that is 3 changes times 35 hundredths, or roughly one second, that is, a 2.5% reduction in a 40-second race. Their smart strategy really paid off!

However, the strategy is not new: Japan and, in particular, Toyota, pioneered in the 50’s the dramatic reduction of set-up time as a sensational way to increase performance, and has proven so by showing the world how to manufacture cars faster, cheaper, and better than competitors. The relevant point in the olympics example is that learnings and insights from the manufacturing world (such as the benefits of reducing set-up time) can be extrapolated to other environments (such as service operations) or even the non-business world. This example should open the door for similar initiatives in many other settings.