The intriguing property of the Serranno series

A not-so-well extended myth confers magic  properties on Serranno numbers. These numbers make up the so-called Serranno series, which starts with two ones and subsequent numbers are calculating by adding two times the previous one to the next-to-previous one (e.g., 3 = 2 x 1 + 1, 7 = 2 x 3 + 1) . Therefore, the first ten elements of the series are:

The magic nature of Serranno numbers stems from this outstanding property, since the silver ratio is described as one of the most mysterious numbers in nature.

It is believed that Serranno followers use a drop of water as a secret symbol to identify themselves. The drop of water is made up by combining a circle and a right triangle whose edges are tanget to the circle (see figure below.)

The drop of water was chosen because it hides the silver ratio. Indeed, dividing the distance between the top corner to the bottom of the drop by the radius of the circle exactly yields the silver ratio!

Order your personalized “Enigmatic Series” here: @SerranoAlej. The kit includes a new series nominated after your name, your own golden-type ratio (choose among several precious metals), a personal geometric shape, and an entry in wikipedia.

Fibonacci numbers: not that magic

An explanation of the “magic” property of the Fibonacci series

The magic nature of Fibonacci numbers stem from this outstanding property, since the golden ratio is described as one of the most mysterious numbers in nature (see Mario Livio’s cite below.)

“Some of the greatest mathematical minds of all ages, from Pythagoras and Euclid in ancient Greece, through the medieval Italian mathematician Leonardo of Pisa and the Renaissance astronomer Johannes Kepler, to present-day scientific figures such as Oxford physicist Roger Penrose, have spent endless hours over this simple ratio and its properties. But the fascination with the Golden Ratio is not confined just to mathematicians. Biologists, artists, musicians, historians, architects, psychologists, and even mystics have pondered and debated the basis of its ubiquity and appeal. In fact, it is probably fair to say that the Golden Ratio has inspired thinkers of all disciplines like no other number in the history of mathematics.

(Mario Livio. The Golden Ratio: The Story of Phi, The World’s Most Astonishing Number, p.6

It is believed that the Pythagoreans used a 5-pointed star, called a pentagram, as a secret symbol to identify themselves. The pentagram was chosen because it hides the golden ratio everywhere.

The golden ratio is also related to beauty in nature. From sunflowers to shells, the golden ratio is supposed to confer beauty on the objects that contain it. Moreover, several dimensions in human creations are also driven by the golden number. For instance, many of the proportions of the Parthenon in Athens exhibit the golden ratio. A contemporary example is the (golden) ratio between the length and the height of a credit card. 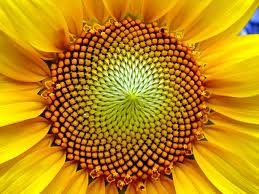 The truth of the matter is that this “magic” property of the Fibonacci numbers can be explained with a bit of math. In fact, the numbers in the Fibonacci series can be calculated using the following expression

which explains the supposed-to-be “magic” nature of the Fibonacci numbers.