The challenge of invisibility

Why Supply Chain innovation is unlikely to be appreciated

When faced with the question “What is the name of the most innovative company in the world?”, people will most likely answer “Apple, of course”. The answer seems undeniable, and there are good reasons for that: iPhone, iPad, and iWhatever are synonyms of great innovative products these days.

However, there is a bias there; when people think about innovation, the first idea that comes to mind is product innovation. However, a company can gain a huge competitive advantage trough process or supply chain innovation. I am referring to notorious cases of companies who have completely redefined the way of doing business in their industries. Some examples include Benetton, which changed the sequence of operations by delaying the time where pieces of garment were dyed (postponement), or Barilla, one of the first firms to adopt VMI (Vendor managed inventory) by managing its customers’ inventory so as to reduce order variability amplification. These changes had a large impact on the bottom line and gave these firms a clear competitive advantage in front of their competitors.

The good thing about process innovation is that it may be hard for competitors to copy: there is no “product reverse engineering” to be performed. Competitors can and will try to emulate, but success is not by any means guaranteed. Think for instance about the well-known Toyota Production System (TPS). It has been around for about 40 years and still firms are trying to adopt it with bittersweet results. Why? It is simply that most of the changes cannot be seen, they are embedded in firms’ DNA, as pointed out by Spear and Bowen*, and followers just copy the visible part of it, such as Kanban systems in the case of TPS. A more recent example is Inditex, whose flagship Zara defined a new paradigm in a mature industry by betting on speed rather than cost. With more than 5,500 stores around the world, Inditex’s founder Amancio Ortega, is today the richest man in Europe, right before Ikea’s founder, Ingvar Kamprad, another visionary who also completely changed the rules of his industry.

This may not be the case for firms launching innovative products: Samsung’s Galaxy  Tab is closely following Apple’s iPad and even introducing features which go beyond what the Apple product offers. It is true that patents help sometimes, but the fact remains that a burden of expensive legal work is usually triggered as soon as competitors start copying or including almost identical products in their portfolios. The legal battle triggered when Windows 95 was launched by Microsoft or the generic drug business in India may be good examples of this.

All in all, supply chain innovation is likely not to be appreciated as much as product innovation, but its impact on the financials and the value of firms may be larger and last longer. Also, given the relatively small efforts exerted so far on supply chain innovation, there must be indeed great opportunities available to explore, low hanging fruit to be taken by those smart people who are able to identify those opportunities.

How much safety stock to hold? A ubiquitous question in supply chain network design

One of the key questions mangers usually struggle with when deciding about centralizing inventories or not is how many units of each SKU should be held in each case. It is a relevant question, because holding inventory usually entails significant holding costs, both financial and material.

Let us learn the basics of how to answer that question by means of a very simple example: Assume that the demand of a typical product in the portfolio in a stable market is normally distributed, with mean 400 units/period and standard deviation 80 units/period. The market is divided into four identical regions with independent demand. The firm service level target is 95%, thus in the (assumed current) CDC there should be 532 units to maximize expected profit:

(If it is not clear to you why this formula is used, please bear with me; it will be explained in a subsequent post)

Now consider that your company is planning to change its distribution strategy from centralized to decentralized, and so you consider having  four identical RDCs, one per region. The average demand in any region will be 1/4 of total demand, or 400 / 4 = 100 units. The regional variance will be 1/4 of total variance (assuming demand independence across regions), thus the standard deviation in any region will be

The quantity per RDC is

Of course there may be more involved scenarios (e.g. constraints or demand correlations across regions) that modify the optimal solution. However, keeping in mind this simple square-root formula as a rule of thumb for safety stock will help make back-of-the envelope calculations when quick business decisions have to be made.

Adidas to cut its assortment by 25%

How many SKUs should a firm offer?

Herbert Hainer, CEO of Adidas AG, announced last Saturday* that the company has plans to cut 25% of its 46,897 SKUs. An argument used by Mr. Hainer to justify their decision is that 20% of the current assortment generates 80% of sales.

If this roughly is the case–which should not be surprising, according to Pareto’s law, it means that 80% of the assortment accounts for 20% of sales. And most likely, within the remaining 80% SKUs, Pareto’s law still holds, i.e., 80% of that 80% account for 20% of the remaining 20% of sales, and so on and so for. Working in this fashion we can prepare the following table for how much the SKUs with the least sales sell.

As the last row shows, cutting SKUs by 25% means removing those items that contribute to 0.006% of sales, or $1.2m, since Adidas sells roughly $18b. Remarkably, those 12,294 items  only sell $83 (roughly 1 unit) on average worldwide! Therefore, it makes a lot of sense to remove them from the assortment.

The natural question to ask at this point is why pruning 25% of the items and not more. Should Adidas also remove the second-to-last row items (15,367 SKUs!), which sell $400 on average worldwide? What about the third-to-last row?

These question nicely illustrates the usual trade-off between Marketing and Supply Chain departments in the retailing industry. A marketing-driven organization, like Adidas, argues that adding an SKU to the assortment increases sales. The more variety offered, the higher the chances that the customer likes whatever is on the shelf thus the probability of making one additional sale. The penalty to pay is in the form of, mainly, inventory holding cost and ordering cost. In good times (Adidas increased sales by 10% last year) this penalty tends to be underestimated.

Indeed there is no clear answer to the question posed above, but we can have a look at other industries to shed some light on the issue. For instance, in the telecommunication telephone manufacturing industry,  Apple sells only 2 SKUs (i-phone 4, either black or white), whilst Nokia sells at least one model for each market segment (for instance, it sells 37 different models only in Germany). Other successful companies have followed the same trend of reducing the number of SKUs to focus on reducing supply chain costs. Good examples include Lidl in Germany or Mercadona in Spain.

A holistic view of the company is necessary to make sound decisions when answering the question of ow many SKUs in the assortment are needed. Supply chain costs should be carefully pondered before blindly following the advice of marketing experts.

(*) Frankfurter Allgemeine Zeitung. The link to the piece of news is here  (in German)

When too much is as bad as too little

Last week I attended a nice talk given by the head of logistics of an e-commerce retailer. His firm holds roughly 10,000 SKUs and serves daily demand to end users from a central distribution center. A characteristic of the industry in which this firm operates is that orders should be satisfied in less than 24 hours. Since suppliers’ lead-times are on the weeks or even months (some are based in Asia), the firm is forced to hold large amounts of inventory to cope with uncertain demand.

The answer to the first question might have to do with the fact that achieving 100% service level is virtually impossible. Therefore (put yourself in the CEO’s shoes,) if you want to provide your customers with an excellent service level, a feasible, close-enough-to-100%, easy-to-remember, and popular figure is 99%. And why not, you want to keep that figure high for all 10,000 SKUs in your warehouse. 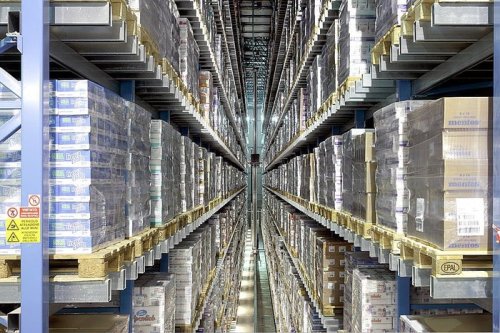 A key point that is missed here is the fact that service level that maximizes expected profit should at least depend on the price and the cost of each particular item. In fact, inventory theory (or common sense) says that one should increase service level until the marginal benefit of adding an additional unit be exactly as high as the marginal cost of adding that additional unit. Note why this makes sense: given the cost of an specific item, if its market price goes up, the firm should increase the service level for that item. Why? a higher price implies a higher unit margin, and you want to capture that additional margin with higher probability, thus inventory should go up. Likewise, if given a price, the cost of an item increases, service level should be reduced to avoid a higher probability of holding too much inventory (as measured in moneys,) which is mainly driven by obsolescence, insurance, spoilage, and financial costs.

There are other factors that have an impact on service level above and beyond price and cost, such as the so-called salvage cost or goodwill cost. But as a conclusion,  and without entering into details on how to compute optimal service levels, it should be apparent that 1) There is an optimal service level that depends on the margin of the product, which may be below or above 99%; and 2) service level should be computed for each SKU, or type of SKUs, thus defining it for all items in a firm does not make by and large much economic sense.